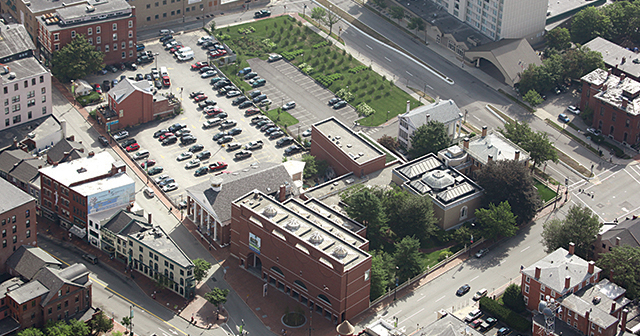 Introduction: The competition for The Portland Museum of Art (the PMA) is aiming to discover the impact a museum can have when it is built through an inclusive lens. By creating a community hub with myriad collaborative spaces, and focusing on groundbreaking approaches to art, the PMA believes it can become a place where all people feel they belong. More than just a new building, the PMA’s campus unification and expansion is a value proposition, envisioning the monumental positive impact museums can have on their communities.

Summary: The Portland Museum of Art (the PMA), founded in 1882, is Maine’s largest and most visited art institution, and among the oldest museums in America. Located in the heart of downtown Portland, one of the country’s most beloved cities, the museum encompasses a full city block of historically and architecturally significant buildings. The PMA’s world-class collection includes more than 18,000 objects, including 19th-and-20th century American and European art, modern and contemporary art, and iconic works from Maine that highlight the rich artistic traditions of the state and its artists.

The museum has outgrown its current campus due to increased visitation and several major gifts to its collection. The broadening and diversification of the artwork, record attendance prior to the pandemic and community feedback have underlined the need for more space.

The PMA sees this as an opportunity to discover the impact a museum can have when it is built through an inclusive lens. By creating a community hub with myriad collaborative spaces, and focusing on groundbreaking approaches to art, the PMA believes it can become a place where all people feel they belong. More than just a new building, the PMA’s campus unification and expansion is a value proposition, envisioning the monumental positive impact museums can have on their communities.

The institution’s progressive and inclusive outlook on curation, education, and engagement will be reflected through innovative and future-forward architecture. This will ensure the PMA and the region’s future is rooted in diversity, equity, accessibility, inclusivity, and sustainability. And as a result, the PMA will transform the very nature of what a museum can be.

The PMA’s new museum wing will anchor and integrate the entire campus and double the institution’s existing size. It will be an environmentally and ecologically responsible expansion that will accommodate new collections and major exhibitions, host community events, programs, and performance space for the seeing and making of art, and will consolidate all staff offices.

The museum’s bold and ambitious agenda will physically harness the PMA’s commitments and deep values through an architecture that will renew, revitalize and redefine a museum’s role in society. The PMA is courageous, forward-looking and intent on creating a paradigm shift for museums around the globe.

The Portland Museum of Art Campus Unification + Expansion International Design Competition challenges architects to form a multi-disciplinary team with accessibility, inclusivity and sustainability experts, landscape architects and graphic designers to create an inclusive place that champions open expression and makes art accessible to all, a place that delivers on the promise of the PMA’s mission, Art for All. The PMA imagines an inclusive and iconic Landmark for the Future.

Stage I: Request for Qualifications (RFQ) invites architects from around the world to form and lead a visionary, multi-disciplinary team of professionals (Design Team), and respond to this RFQ. Upon evaluation of the RFQ submissions, the PMA will select up to four firms and their proposed teams to participate in Stage II.

Stage II: Design Competition invites the selected, shortlisted teams (Shortlist) to develop a concept design for the project. An honorarium of $50,000 will be paid to each of the shortlisted teams who have met PMA’s Stage II requirements, payable upon selection of a winning team.

The shortlisted teams submissions will be displayed for three weeks at the PMA in Portland, Maine as well as online on the competition website. In addition, all finalist teams will be requested to present their concept designs in a public forum to be held at the museum and will be given the opportunity to engage in a Q+A with this audience prior to their presentation to the competition Jury.

In December 2022, a winning design team will be selected by a Jury that includes: