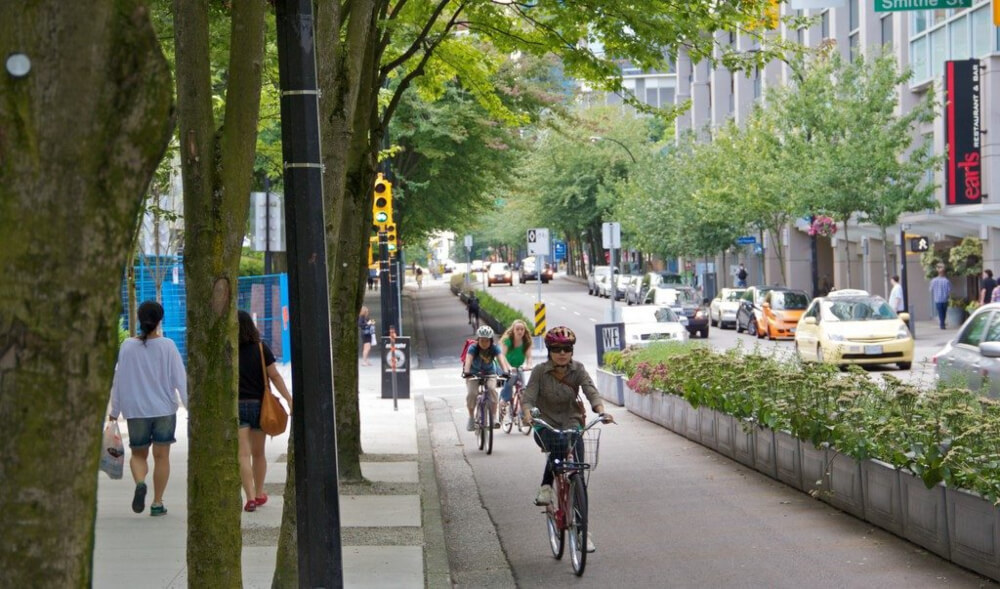 Over the last two decades, Vancouver has put a complete streets design principles into action and the city is already seeing the benefits.

Complete streets is a transportation policy and design approach. It requires streets to be planned and operated in a way that enables safe and comfortable travel and access for all users – for those who are walking, cycling, driving automobiles, riding public transportation, or delivering goods. Complete streets design approach includes adding sidewalks, traffic calming measures, protected bike lanes and green infrastructure.

In the 1990s, Vancouver began to use traffic circles and curb extensions to calm the traffic in residential areas. The city also converted some side streets into park-like streets intended for biking and walking. Today, the city has 108 miles of such corridors.

Vancouver officially adopted a Complete Streets Policy Framework in April 2017. “We are trying to look at streets holistically, bringing land use, green infrastructure, public space and transportation together as seamlessly as possible,” said Rich Carmona, a senior Complete Streets planning engineer with the City of Vancouver.

In the last decade, Vancouver has expanded the city’s cycling routes network. Now, the city has a downtown grid of protected bike lanes. In 2014, Vancouver went a step further and added protected intersections across town. Protected intersection means that vehicles turning right are separated by a car length from crossing cyclists and pedestrians. This provides increased visibility and reaction time for the drivers.

In 2016, the city adopted an integrated rainwater plan that seeks to capture and clean 90 percent of stormwater as close to where it falls as possible. Stormwater will be used to water the trees and plants by the streets. “In order to support large street trees we are putting perforated pipe and subsurface storage under the bikeway”, said Cameron Owen, the city’s green infrastructure planner. “This will provide a source of water and expand the rooting zone so they can grow to full size and maintain better health.”

The benefits of complete streets design

In 2012 the city began transforming the east-west Comox-Helmcken corridor according to complete streets design policy. Four years later, two studies found a 16 percent increase in residents’ daily exercise and a small but significant drop in poor mental and physical health of the residents. Studies also showed a rise in cycling trips and a drop in auto trips which corresponded with a decline in vehicle emissions.

Complete street design policy is another part of the effort to make cities sustainable, healthy and enjoyable to live in.