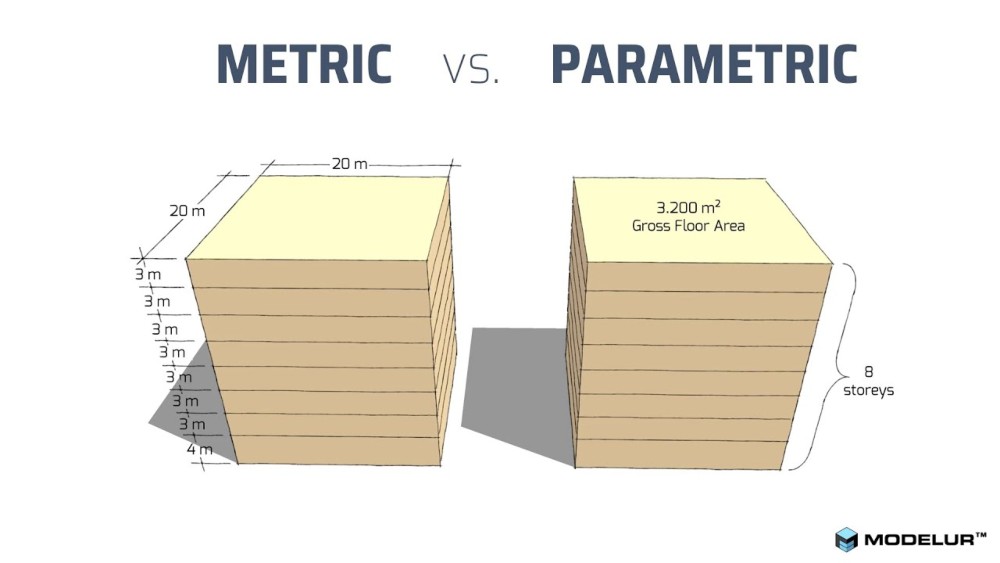 You are probably no stranger to parametric design, but if you are new here, it is a process based on algorithmic thinking that enables the expression of parameteres and rules that, together, define, encode and clarify the relationship between design intent and design response.

There are two main types of parametric approaches; algorithm-based and human-based. Each has its own advantages and disadvantages. Let’s take a look.

The algorithm-based parametric approach is when the final results are calculated completely by a computer, based on algorithms provided by humans. Sometimes this is also called generative design.

The key benefit of the algorithm-based approach is that it is fast, but not until the algorithm for a specific development is created. Since the algorithm is customized to the project it can be difficult to use in different locations. After all, the end result can only be as good as the algorithm driving it.

Also, fine tuning of end results can be relatively hard, if there is no option to manually edit specific parts of generated development. The reason is that generators usually create complete massing based on the set of chosen input parameters that are valid for the whole development. Not being able to manually edit just a part of generated solution to eg. create a highrise (urban acupuncture) at specific part of the development, can thus limit the usability of generators.

Another benefit is that the algorithm-based approach can produce thousands of possible options from which you can select the most optimal result. However, this can also be problematic as many of those options might not be good at all, and then we are faced with a different task – how to pick the option that is best? Selecting one or two that work best among thousands can be more burdensome than just creating a few that work manually.

The human-based parametric approach is a semi-automatic process where the computer assists in working more efficiently, but the designer is still able to craft the space manually.

It is much faster than doing everything manually, but it cannot even compete with the algorithm-based approach. The key benefit is that it gives you full control over the design and quality. Depending on the program, it can also be more intuitive and closer to an urban design process.

Which approach should you choose?

This depends on different factors (eg. small or large sized development) and goals (eg. evaluating zoning rules or creating final development). We recommend starting with the approach that gives you first results as quickly as possible and then iterate and manually refine your model to deliver a high-quality product.

That is why in Modelur, we offer both approaches. The Massing Generator can quickly produce some results to get a feel for space and project. Once you are satisfied, it is possible to go into the design and manually craft the space.

Differences Between Metric and Parametric

Before we jump into the benefits of using parametric urban design, let’s also make a clear difference between metric and parametric design.

The traditional metric approach needs traditional dimensions of a building to then calculate areas and volumes. This can involve using tools to measure each edge and then performing calculations.

With the parametric approach, this is not necessary because the model offers direct end values. These can be worked with the achieve the same results, only faster.

For example, you have two 3-storey buildings, one created using the metric approach and the other parametric. They look exactly the same. The one done using the metric approach will have measurements for each floor. Whereas the parametric building just needs a defined gross floor area and number storeys. The computer then calculates what should be the dimensions to fulfill required parameters.

One additional benefit is that parameters can also describe what can traditional metric dimensions can’t – eg. phasing, which can then also be taken into account of the final design output.

We compared the time and accuracy of manual modeling, parametric modeling, and interactive 3D zoning. Of the three methods, interactive 3D zoning achieved the FAR goal of 1.5 without exceeding or being under and while taking a fraction of the time. Leaving you with more time to create more options or refinement.

Participants were asked to create a model using the traditional metric approach and asked to try and achieve a FAR of 1.5. As the images show, it was incredibly difficult and errors were as great as 40% off the mark. It also took much more time when compared to the parametric approach.

The red line, representing parametric modeling has less than 10% error in every single instance. When comparing these it becomes very clear which method allows you to work more accurately.

We wanted to investigate if there would be more or fewer mistakes when comparing metric and parametric modeling.

For this part of the research, we used the distance between buildings. When using the manual method, the percentage of misplaced buildings increased. For the parametric modeling test, the number of buildings placed too closely quickly reduced.

This is due to Modelur’s integrated verification system. When specific parameters are exceeded, in this case, the distance between buildings, the program will alert the user about that through its easy-to-use user interface. Our research showed that this proximity warning feature alone diminished the number of errors in the model from 35% to 10% (n=20).

For the final aspect of this research, we wanted to see if working faster and more accurately has any influence on the overall quality of a design. The research showeds that the end result mostly still depends on the human designer. While parametric design will help you finish faster, it will not make you a better designer. Nor worse, for that matter. But it can give you more time to come up with a better, more thought out solution in the end.

As mentioned previously, SketchUp does not have parametric modeling integrated, but it is possible through the use of the Modelur extension. Let’s take a look at four parametric capabilities of Modelur that we are sure you will love.

One of the benefits of Modelur is that values and calculations for parametrically designed buildings are available instantly without any need to hand-calculate. This is opposed to manually created buildings that need to be measured and calculated by hand.

Parametric buildings can have their built-up area adjusted in Modelur and will instantly reflect the results within your SketchUp model’s geometry.

Modelur also allows you to lock a building’s final built-up area in place so that adjustments to the building will not change that value, just it’s geometry. In this instance, if a building is made narrower, it will automatically stretch to become longer so that the built-up area remains the same.

Modelur’s storey options are a great way to save time and improve accuracy when modeling buildings. In the building tab of Modelur, the number of storeys and their height can be defined. Alternatively you can also use SketchUp’s built-in Scale Tool to stretch the building vertically, and Modelur will add (or remove) storeys to it automatically.

This is opposed to the manual method that requires entering the building, selecting faces, and cut them out, or utilizing the PushPull SketchUp Tool to add storeys.

In the building tab of Modelur, the number of storeys and their height can be defined.

Thanks to Modelur, values of parametric buildings are available immediately with no calculations. Any adjustments to any of the parameters will instantly adjust the entire building.

Terraces can be created with ease with Modelur. Enter the parametric building, select SketchUp’s PushPull tool and push the wall in. That’s it.

The example shown in the tutorial video, terraces were created on the top two storeys and even if floors were added or removed, the terraces remained and kept their shape.

The final parameter we are discussing today is phasing. This Modelur feature allows for construction years to be added to individual buildings. This allows for a developmental timeline to be visualized within the model.

For example, construction on a building will not begin for a couple of years, but you want to see the urban design currently and after construction. In the Survey tab of Modelur, the development timeline can be used to visualize your model over time, should you add some phasing information to your developments.

Hopefully, by now, you understand why we are so passionate and excited about Modelur’s capabilities and parametric urban design. Why spend more than double the time with less accuracy to do the same task that can be completed with Modelur in a few clicks?

The features discussed above aren’t the only reasons you can build more with Modelur. Check out these other articles to see how you can work smarter, not harder.